On Thursday 24 March, SEMMA were invited to host a visit by the Federal Minister for Employment, Workforce, Skills, Small and Family Business, Stuart Robert MP.

Minister Robert covered a number of federal government actions implemented and in-progress, which will have implications for skills across manufacturing and engineering. He spoke of the changes to the skills and qualifications structures designed to increase participation of industry .

He went on to outline the changes which will define future manufacturing and engineering training and qualifications frameworks in Australia. ASQA has been announced as the national training package assurance body. This means ASQA will replace the Australian Industry and Skills Committee (AISC) as the body to approve training packages. 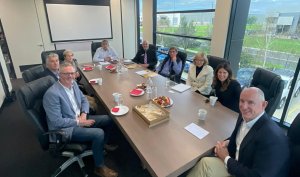 This role will commence 1 January 2023 and will function in conjunction with Industry Clusters (replacing the current Skills Service Organisation (SSO) and Industry Reference Committee (IRC) system).

Minister Robert spoke about the need for strong, robust supply chains and on-shore manufacturing and the positive benefits under the Modern Manufacturing Strategy. SEMMA agreed that it was great to have that acknowledgement for manufacturing at the Federal level and to see investment in the sector. At the same time, we made it clear that the application of the MMS and associated grants limited to 6 sectors meant many of our members were ineligible. Similarly, the level of dollar for dollar investment favoured larger companies. We re-iterated the importance of SME’s as the employers of 95% of the manufacturing workforce in Australia.

We also discussed with the Minister that Peter Angelico’s concept of a government media campaign, similar to those used for Tourism Australia, be developed to promote Australian manufacturing and to attract people to take up work and careers in the sector.